Race, Revolution, and the Struggle for Human Rights in Zanzibar
The Memoirs of Ali Sultan Issa and Seif Sharif Hamad

“This extraordinary book is not yet available in Tanzania, nor in Swahili, but requests are beginning to trickle in for copies to be shipped, photocopied, begged and borrowed by those who have heard of its explosive contents…. Prefaced by an excellent introduction that demonstrates mastery of Zanzibar’s tangled history, this book will be a key text in Tanzanian history for many years to come.”

“(Race, Revolution, and the Struggle for Human Rights in Zanzibar should…be commended for representing two different interpretations of, and positions within, the grander historical narrative, reminding the reader that historical and political events are always influenced and interpreted by individuals.”

“The two narratives provide distinctive and complementary perspectives on the Karume years during which they were politically active: the years between Hamad’s political awakening and Issa’s imprisonment. The introductory material by Burgess himself concisely but competently provides a framework that contextualizes the biographies for those unfamiliar with Zanzibar, while at the same time filling in the relevant details for those who are familiar with the island but less so with the finer details of recent political history.”

The Journal of Modern African Studies

“Issa’s voice is engaging in its contradictions: mischievous, preening, and as generous toward others as toward himself. His amanuensis is to be commended for capturing it on the page…. The memoir by Seif Sharif Hamad is more sober and substantive, if only because it recounts a more impressive resume…. (A)lthough Burgess admits to having fallen for Issa’s personal charms, he clearly is more sympathetic to Hamad’s political vision. And indeed, the final pages of his introduction set out the context of that vision in an admirably concise overview of Zanzibar history.”

Zanzibar has had the most turbulent postcolonial history of any part of the United Republic of Tanzania, yet few sources explain the reasons why. The current political impasse in the islands is a contest over the question of whether to revere and sustain the Zanzibari Revolution of 1964, in which thousands of islanders, mostly Arab, lost their lives. It is also about whether Zanzibar’s union with the Tanzanian mainland—cemented only a few months after the revolution—should be strengthened, reformed, or dissolved. Defenders of the revolution claim it was necessary to right a century of wrongs. They speak the language of African nationalism and aspire to unify the majority of Zanzibaris through the politics of race. Their opponents instead deplore the violence of the revolution, espouse the language of human rights, and claim the revolution reversed a century of social and economic development. They reject the politics of race, regarding Islam as a more worthy basis for cultural and political unity.

From a series of personal interviews conducted over several years, Thomas Burgess has produced two highly readable first-person narratives in which two nationalists in Africa describe their conflicts, achievements, failures, and tragedies. Their life stories represent two opposing arguments, for and against the revolution. Ali Sultan Issa traveled widely in the 1950s and helped introduce socialism into the islands. As a minister in the first revolutionary government he became one of Zanzibar’s most controversial figures, responsible for some of the government’s most radical policies. After years of imprisonment, he reemerged in the 1990s as one of Zanzibar’s most successful hotel entrepreneurs. Seif Sharif Hamad came of age during the revolution and became disenchanted with its broken promises and excesses. In the 1980s he emerged as a reformist minister, seeking to roll back socialism and authoritarian rule. After his imprisonment he has ever since served as a leading figure in what has become Tanzania’s largest opposition party

As Burgess demonstrates in his introduction, both memoirs trace Zanzibar’s postindependence trajectory and reveal how Zanzibaris continue to dispute their revolutionary heritage and remain divided over issues of memory, identity, and whether to remain a part of Tanzania. The memoirs explain how conflicts in the islands have become issues of national importance in Tanzania, testing that state’s commitment to democratic pluralism. They engage our most basic assumptions about social justice and human rights and shed light on a host of themes key to understanding Zanzibari history that are also of universal relevance, including the legacies of slavery and colonialism and the origins of racial violence, poverty, and underdevelopment. They also show how a cosmopolitan island society negotiates cultural influences from Africa, the Middle East, Asia, and Europe. 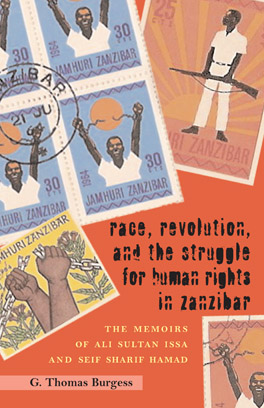 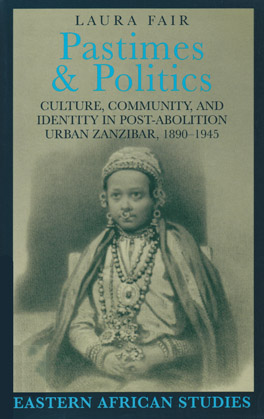