Paulin J. Hountondji, agrégé de philosophie from the Ecole normale supérieure of Rue d’Ulm in Paris, is a professor of philosophy at the National University of Benin. He is the author of Philosophy: Myth and Reality, one of the most influential books on African philosophy. John Conteh-Morgan is a professor in the department of French and Italian and African and African-American Studies at Ohio State University. 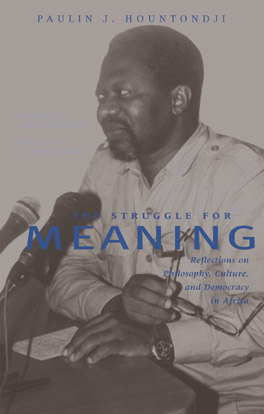 The Struggle for Meaning
Reflections on Philosophy, Culture, and Democracy in Africa
By Paulin J. Hountondji · Translation by John Conteh-Morgan · Foreword by K. Anthony Appiah

The Struggle for Meaning is a landmark publication by one of African philosophy’s leading figures, Paulin J. Hountondji, best known for his critique of ethnophilosophy in the late 1960s and early 1970s. In this volume, he responds with autobiographical and philosophical reflection to the dialogue and controversy he has provoked.