Jeremy Seekings has a joint appointment as Professor of Political Studies and Sociology at the University of Cape Town. He is also Director of the Social Surveys Unit in the Centre for Social Science Research at UCT. He is the author of Heroes or Villains: Youth Politics in the 1980s (Ravan Press, 1993) and coauthor of From Race to Class: The Changing Nature of Inequality in South Africa. 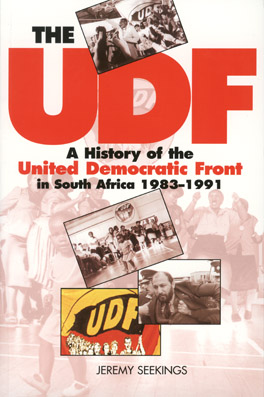 The UDF
A History of the United Democratic Front in South Africa, 1983–1991
By Jeremy Seekings

The new South Africa cannot be understood without a knowledge of the history of the UDF and its role in the transition to democracy.This is the first major study of an organization that transformed South African politics in the 1980s. By coordinating popular struggles on the ground and promoting the standing of the African National Congress, the UDF played a central role in the demise of apartheid and paved the way for South Africa’s transition to democracy.Based