Christa Kamenetsky was a schoolchild in Germany during World War II. She studied at the universities of Kiel, Bremen, Freiburg, Central Michigan, Munich, and Washington. She is also the author of The Brothers Grimm and Their Critics: Folktales and the Quest for Meaning and was a professor of English at Central Michigan University, where she taught children’s literature and comparative literature. 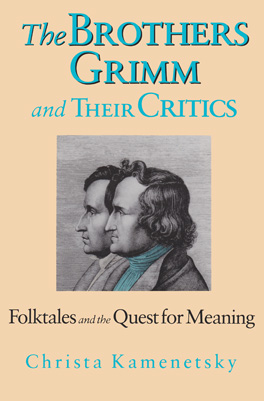 Critics of the Grimms’ folktales have often imposed narrow patriotic, religious, moralistic, social, and pragmatic meanings of their stories, sometimes banning them altogether from nurseries and schoolrooms. In this study, Kamenetsky uses the methodology of the folklorist to place the folktale research of the Grimms within the broader context of their scholarly work in comparative linguistics and literature.