Carol Summers is assistant professor of history at the University of Richmond. 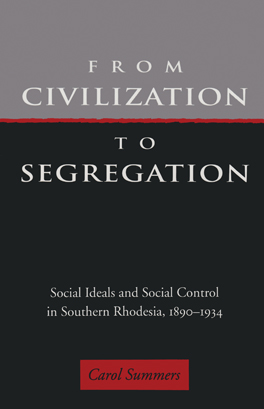 From Civilization to Segregation
Social Ideals and Social Control in Southern Rhodesia, 1890–1934
By Carol Summers

This study examines the social changes that took place in Southern Rhodesia after the arrival of the British South Africa Company in the 1890s. Summer’s work focuses on interactions among settlers, the officials of the British South America Company and the administration, missionaries, humanitarian groups in Britain, and the most vocal or noticeable groups of Africans.